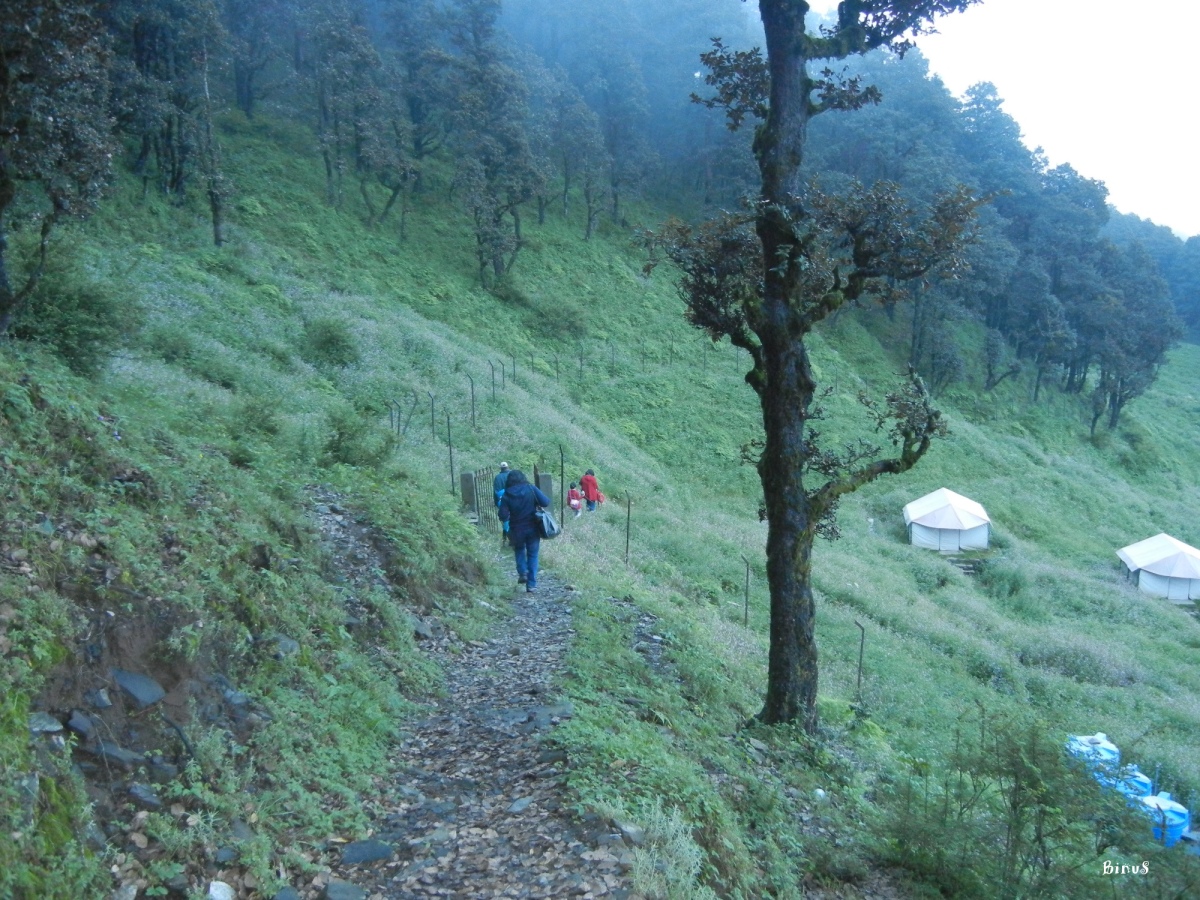 To date I don’t understand how we drove between the mountain face and that ‘chhoti si dikhat’ in the form of a huge boulder. I was convinced that we were going to be stuck. But nary a scratch on the XYLO, Surya got us to the other side. Not that he was doing us a favour, because for the next 3 kilometers we drove on one of the most horrendous roads in the world – well, whatever road was left in the middle of all those puddles, ditches and exposed rock. Our bones rattled as the vehicle jolted from one ditch to the next. Reva and my biggest concern was that Yugi who was sleeping peacefully in his car seat was going to be jolted awake and bawl his heart out… an additional source of stress that all of us could do without. But funnily enough, he slept right through the whole drive! The girls in the back were beginning to make noises about being hungry and tired and their litany of ‘how much longer’ and ‘when will we reach?’ had just begun, when we crested the top and reached the pass.

The road to Jalori Pass is listed in www.dangerousroads.org. It says and I quote, “The road’s winding design, providing stunning panoramic views, is very curvy and fun for a leisurely ride, so it pays to take it slow. From Ghayagi to Jalori Pass, the road is a mix of mud and pebbles restricting the speed of the vehicle to barely 20 kmph. After Shoja, the climb to Jalori Pass is steep and just about 3 kms before the pass, road conditions become bad, narrow and steep which makes it more difficult to climb even in first gear. A traveller on this road must follow some rules: Extreme caution advised, drive in first gear only, steepest gradient, most dangerous curves along the road.” Closed during the peak winter months, the drive along this road provides jaw-dropping amazing views, but at a price.

It was 5.30pm – nearly 2 hours behind schedule. The shops (all of 3 in total), one of which doubled up as a restaurant, were shutting their shutters and the local ladies and gents who worked in the same were piling into a mini-truck / mountain taxi for the ride back to their homes. At these heights everything shuts down by 5… 5.30 latest as the sun sets in the blink of an eye and you really don’t want to be stuck up here when it is dark. Unless of course you are part of a group of city bred idiots who are willing to pay money to do the same.

The scenery here is a lot different from what we got at Narkhanda – same trees, but somehow more dark and forbidding. Maybe it was the mist and the gathering darkness. As we watched the mini truck drive away, we couldn’t escape the feeling of being abandoned in the middle of the mountain. Thakur the man employed by the HP government to take care of the Jalori camp had waited till 4 and then left; but luckily Surya managed to reach him on his mobile and he came right back up to the point where we were waiting. Reaching the camp meant that we had to take the XYLO a kilometer or two down a mud road off the right of the ‘main’ road. No biggie. Except that it had been raining the previous night (it was monsoon season after all) and it had started to drizzle again.

With Thakur walking ahead on the muddy path, Surya started driving down the mud road. The rain and passing herds of cows had turned the otherwise solid mud road into a slush fest. If I had thought that the roads to Jalori Pass were scary, I was wrong. This was way scarier. We had barely managed to go halfway down when the car started to skid to the right towards the edge. Surya immediately stopped driving and gently applied the brakes. By the time the car came to a stop, we were near the edge. It was almost in a haze that we blindly followed Surya’s instructions to get out slowly from one side without shaking the car too much. Cause of the baby seat, Reva ended up having to get out towards the edge and literally hugged the car on her way out. Once the three adults and three kids were out, Surya found it easier to maneuver the car away from the edge. He then inched forward slowly another 500mts until we reached a point where the car could be parked close to the rock face and we could see the Jalori Camp 200 to 300 feet below us.

The walk of 500 meters to where the car was parked winded my daughter Sakshi and me out – our altitude sickness which had abated as we had descended from Narkhanda was now hitting us with a vengeance at a height of 10,800 feet (3,120M). We were also rather shaken up by the drive and skid down the mud path. The idea of hiking down to the camp was also not doing us a lot of good. But there was no way we could drive out at this point of time in the day.

The camp itself is in a clearing so we had enough sunlight to guide us down. But making it down that narrow path was another story altogether as both Sakshi and I were having trouble breathing. We’d take two steps and then wait for a couple of minutes to get our breath back. What made it worse was the fact that Thakur had just skipped down that path with our overnight bags. The altitude also seemed to have had no affect whatsoever on my husband and on the Rathores, who were quite familiar with the mountains. It took the two of us, with Surya supporting Sakshi, nearly 15 minutes to get down those 200 odd feet; something the others did in 5 minutes.

But even those 200-300 feet made a difference to how we felt. The headache and chest pain subsided a bit. The camp is owned by the Himachal Pradesh Government and during peak tourist season (pre-monsoon and in September and October) is almost fully occupied and manned by two full-time staffers. During off-season the camp is pretty much empty and we were the only two families there! And it was manned by one staff – the aforementioned Thakur! The camp has about 20 tents – for individuals and families – I am not very sure about the number cause honestly I was in no condition to count, besides a longish tent that doubled up as a dining room, Thakur’s tent and another smaller tent/kitchen with an open choola! There were two port-a-loos a few meters further. Apparently this is a new addition, and even until a few years ago, if you had to go, you had to risk cold grass tickling your nether regions.

The guest tents were separated from the dining, staff and kitchen tent by a tiny, gurgling stream with a little bridge across it. Of course there were no lights, so taking strolls in the moonlight or starlight or visiting the loo after sunset meant keeping your torch handy and making sure that you placed your feet on the bridge instead of walking into thin air and taking an unplanned bath in a cold stream.

This is turning out much longer than I anticipated, so more in the next post, where I write about an unplanned middle-of-the-night visitor in our tent and the effect of mountain air on spiders… ugghh! Please do let me know your thoughts on this post and if you think it is too descriptive or any other feedback you may have.